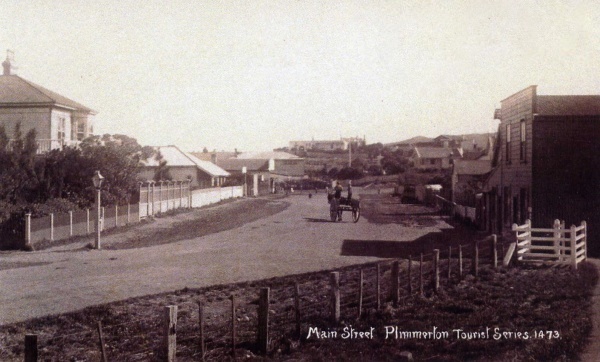 Our streets and how they got their names

Airlie Road – named by George Troup (read more about George Troup) after the family seat of the Ogilvie’s of Airlie.  This road was originally known as Pukerua Road.  It was changed to Airlie Road on 19th January 1961.

Bath Street – named by John Plimmer after the spa town in England.

Beach Road – This road leads to the beach.

Cedric Place – named after Cedric Jack Tse, 1928-1988.  In 1956 he was a civil engineer with the Ministry of Works working on the construction of the Wellington Airport, then in 1960 he was appointed chief engineer with Wright Stephenson & Co (later Fletcher Challenge) managing many land developments and construction projects.  Cedric Tse founded the Tse Group in 1965.

Cluny Road – named after George Troup, owner and developer of 365 acres of land at Plimmerton after the family seat of the Gordon clan who were his father’s forebears.

Corlett Road – Edmund Murray Corlett was a flight sergeant from Plimmerton who was killed in WWII when returning from a raid over Italy.

Exeter Street – this was the name given to the stretch of road from the present entry in Plimmerton to the corner of Grays Road. Exeter is near Bath in Wiltshire, England, and continues a number of Plimmerton streets named in connection with John Plimmer. 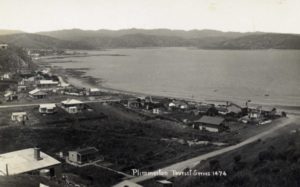 Gordon Road – named by George Troup after the Gordon clan of Cluny in Scotland.

James Street – named after James Walker, who farmed in the area.

Ogilvy Terrace – named after Lady Ogilvie from whom George Troup’s mother Jean was descended.  In 1640 Lady Ogilvie became a legend for her defiance of the Duke of Argyll’s forces.

Queens Avenue – It was thought that Queens Avenue was named in recognition of Queen Elizabeth II, but the article below is dated 1892 so we now think Queen’s Avenue should be attributed to Queen Victoria who was on the throne at that time.

Reserve Road – leads to one of Plimmerton’s oldest reserves. 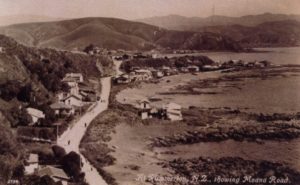 Steyne Avenue – probably named by John Plimmer after The Steyne (pronounced Steen) which was the social centre of Regency Brighton on England’s south coast.

The Track – This was probably part of Pukerua Track (also known as Troup’s Track) which ran from Paremata Bridge to Pukerua Beach.  It was originally only a bridle track, made before Paekakariki Hill Road and the railway were formed. 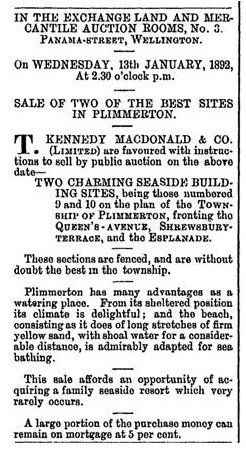 Toup’s Road – George Troup was Mayor of Wellington and NZ Railways architect.  He designed Dunedin’s Railway Station and was subsequently nicknamed Gingerbread George.  He designed and had a stone house built for himself in Motuhara Road and also designed Somme House in Karehana Bay for his brother-in-law Charles Moore.  Troup was eventually knighted.

St. Andrews Road – James Walker, who farmed in the area, came from St. Andrews in Scotland.

School Road – this road leads to the school.

Shrewsbury Terrace  – mentioned in 1892 article is no longer here but is commemorated by a small historic plaque at the western entrance to the railway underpass.  John Plimmer was born in Upton-under-Amon which is near Shrewsbury and the street may have been named for this reason.  (Research is on-going to determine if Shrewsbury Terrace became Bath Street and the Esplanade became Steyne Avenue.)

South Beach Road – this road follows the beach to the south.

Yesterday and today
Scroll to top