John Kirkcaldie was a Wellington Merchant and in 1902 – 1907 chairman of the Wellington and Manawatu  Railway company. He built this house as a holiday home about 1896 and named it Tangi Moana. His family spent up to six months here each year. This remains a private residence. 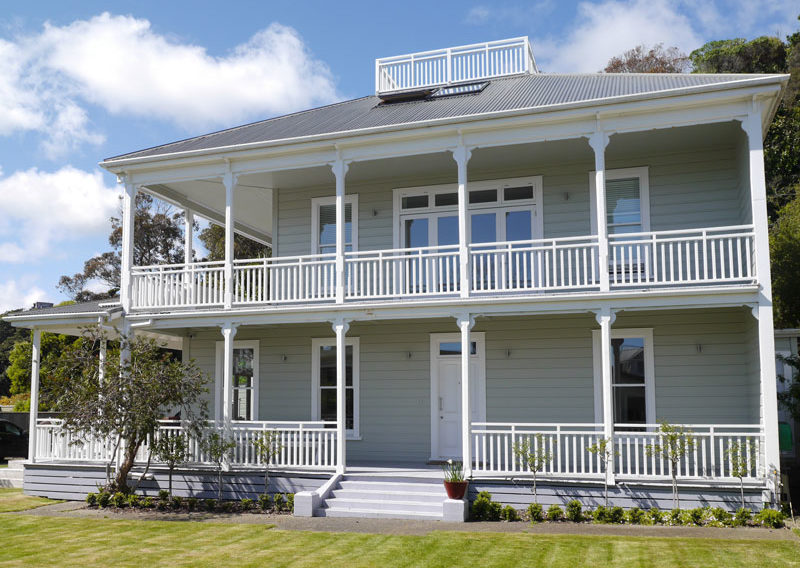 John Kirkcaldie, a Wellington merchant, was chairman of the Wellington & Manawatu Railway Company from 1902- 1907. He was also co founder of the iconic Wellington Department store Kirkcaldie and Stains which closed in 2016 after 152 years trading. Kirkcaldie learned his trade in London and then Dublin and eventually meet Robert Stains in Sydney. They opened the store in Wellington in 1863 originally selling drapery. Stains returned to England in 1886 and the Kirkcaldie family ran the shop until the Great Depression.

Kirkcaldie, his wife Mary and their family lived in this Plimmerton house, known as Tangi Moana ( crying sea ), for up to six months of the year. It was designed as a holiday home for quiet weekends at the beach and to accommodate Kirkcaldie family gatherings. Surplus building materials from their Thompson Street city dwelling and recent store renovations were used to build this majestic 480 square metre house. The property is still a double section of more than 1400 square metres and once had a substantial orchard and vegetable garden and a tennis court in the front of the house where the garage is now.

Alexander Reith, a farm manager and mechanic brought the Kirkcaldie property in 1938 and built a vehicle workshop named Reith’s Garage over the tennis court. This garage still remains and now operates as Plimmerton Motors.

Back to the list of Heritage Trail sites
Site 2