The white ball, a navigation maker, and associated railway tracks were constructed in about 1950 by two local men, Dick Pearse and Ray Mildenhall, to launch their boats and to guide their return at night. There were originally two navigation balls with the second one to the right, further out to sea.

The buoys were constructed around 1950, after the Sea Wall was completed during WW11 and were used by Ray Mildenhall and Dick Pearse. Both were keen fisherman who lived opposite the slipway. There were originally two navigation marks with the one on the right further out to sea. The rail track was further divided by a set of points that gave rise to a second rail line. 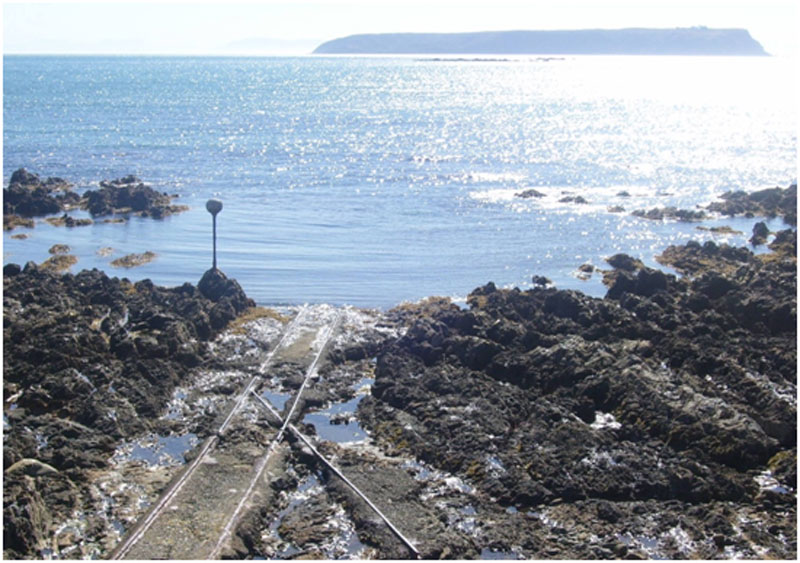 Here are some recollections provided kindly by Kevin Coffey, nephew of Ray Mildenhall.

“Uncle Ray (Mildenhall) lived about half-way along Sunset Parade. His 14 foot dinghy sat on its trolley above the rock line. A forty foot or so rail angled down to just beyond the low tide mark and we’d let the boat run down, gear and motor already secured, ready to take us out to the reef. When conditions were right and we had time, we’d even go out to Mana Island for some deep sea Groper (even though Uncle Ray couldn’t swim). Normally it was Ray and his daughter Joan and myself that would go out. My dad came too sometimes.

My memories come from when I was around 12-14 years old. Uncle Ray seemed very old. He knew where the fish were and we always came back from the reef with Terakihi and Cod. When the fishing was especially good we would stay out quite late. This is where the two buoys came in handy.

They were actually like large ornamental light coverings as I recall, and were attached to metal rods that were concreted into the rocks such that one was at the entrance where we could get in through the rocks to the rail and the other further in just alongside the rail. The buoys were white but did not light up. Coming towards the shore, even when really dark, we could line these two buoys up and head through the gap in the rocks. It would have been risky without them.

The youngest on board had the job of jumping out into the water and steadying things before hand winching the trolley back down to the water. Going out fishing with Uncle Ray taught me a lot and made the life of a young lad that much richer.”

Back to the list of Heritage Trail sites
Site 3