Local residents formed the Plimmerton Volunteer Fire Brigade in 1934 following several disastrous fires. This station, fully funded and built by the community, was opened in 1955 as a base for volunteers, and storage for the fire engine and other equipment.

During Plimmerton’s early years several disastrous fires devastated boarding houses, little wooden baches, homes and shops in Plimmerton.  (See site 33: Fires of Plimmerton).  With no fire-fighting equipment, no ponds or reticulated water, rainwater tanks and the sea were the only sources of water.

The nearest fire brigade was based in Wellington.   The bridge at Paremata had yet to be built (1936) and the only access was via Pauatahanui, and along the narrow, shingle Grays Road to the village.  Until 1938 when the State Highway opened beside Taupo Wetlands, the only access to Pukerua Bay was along the same route, then via the Plimmerton foreshore and over Airlie Road.

In February 1934, a group of local men met and agreed to form the Plimmerton Volunteer Fire Brigade. Led by George McDermid, 12 members set about raising funds (with £5 subscriptions) and buying basic equipment, buckets and dippers.  To alert the brigade, a piece of railway iron was hung from a pole outside the McDermid’s home at 3 Motuhara Road and in the words of George’s son Robert, “Someone would beat the hell out of the iron with a hammer. You could only hear it up to about 100 metres away on a still night, so it was pretty useless.”    The brigade was ready for business by July 1934.

In the early years firefighting required climbing on top of a home rainwater tank, taking several minutes to fill a 20 litre kerosene tin using a dipper, then throwing the water on the fire. There was no fire engine, no training, no safety gear or uniforms, just normal everyday wear.

Fortunately call-outs were few.  Most fires were in scrub and grass, often caused by sparks from the steam trains as they passed through.  Unlike today’s brigade, the men seldom attended anything other than fires. That was until the 1942 earthquake when they were given the job of inspecting chimneys and removing any considered unsafe.

The fire brigade served a wide area from Pukerua Bay to Paremata and east to Pauatahanui, including the military camps at Pauatahanui and Judgeford, and a Public Works Camp.  Auxiliary brigades were established later at Paremata and then Pukerua Bay. They provided back up. 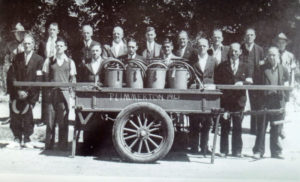 The first appliance the brigade acquired was a hand cart. This was in 1942 after the brigade came under the auspices of the Emergency Precautions Scheme (EPS) during WWII.  On occasions the men roped the handcart to the back of builder Harry Crawford’s truck and set out for the fire.  They were also given their first uniforms, overalls and EPS armbands.

In 1945 the brigade changed the hand cart for a 1923 Chrysler Sedan which they converted into a fire engine.  It carried beaters, stirrup pumps and 200 feet of hose. A front-mounted geared pump worked off the truck’s motor and must have been a real boon. This engine came to a tragic end when, 10 years later, it ran off the edge on a sharp corner on Airlie Road.  For the men it meant going back to using the hand cart for quite a time until another engine became available.   The railway iron on the pole was replaced by a siren mounted above the school building (now the kindergarten).  The siren was prone to ‘tripping’ when its pole swayed in a strong wind.  No doubt the school children enjoyed many unintended interruptions! 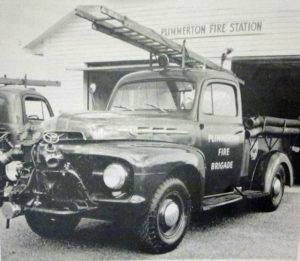 One of two purpose built Ford fire engines in use in the 1950s
Photo courtesy R Millar & R Postlewaight, Sand, Sea and Sirens –
75 Years of Firefighting in Plimmerton 1934-2009

A Ford purpose-built fire appliance replaced the Chrysler and the brigade needed a building to house it.  The men approached the Hutt County Council for help.  They were offered two guard huts which the brigade brought to Sunset Parade and built foundations.   After the war they bought a radar shed which was at the top of Paekakariki Hill, dismantled it and slid the pieces down the hill onto a truck on the road below. Back at the building site at Fire Station Point, volunteers dug foundations and poured concrete.  Once the foundations were finished the trusses slotted in perfectly.  The building was ready for use for the first time in 1952.  It took the volunteers another three years to complete the building for the official opening on 19 November 1955.  Later the station was re-roofed and extended to include a second engine bay.

The Plimmerton community not only built the station, they paid for it too.  Throughout the many years of construction, the brigade would go house to house raising funds.  The brigade was totally funded by the community and its financial resources were often stretched until the mid-1950s when WG (Bob) Pope, then local member on the Hutt County Council, managed to obtain an annual allocation from rates. This did away with the ongoing need to fund raise, so necessary throughout the previous 20 years. 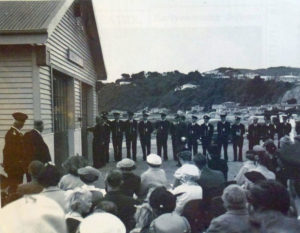 The later 1950s brought water reticulation to Plimmerton which would have made firefighting very much easier.  The brigade was beginning to face a new demand though; traffic accidents.  During the next decade members attended 1-3 incidents a year in the Plimmerton fire area and numbers rose to an all-time high of 39 in 1999.   Since then the range of work has continued to increase; anything from milk spilt on the road to flooding, and storm damage to animal rescue. Nowadays the brigade, alongside the ambulance service, is a first responder to numerous emergencies in the area.

Over the years the brigade has upgraded its fire appliances, uniforms and training and over 300 men and women have given service. A skilled and dedicated group of men and women continue to willingly turn out for the community when needed.  The brigade has been central to the life of the village, displaying its latest appliance, contributing with sausage sizzles, clean-up days, and assisting at many community events.

Robert McDermid,  From Scotland to New Zealand: The McDermid Story, 2000

Back to the list of Heritage Trail sites
Site 30