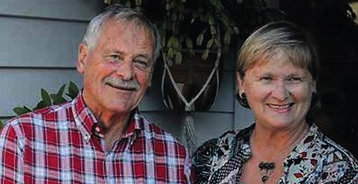 Popular couple Helen and John Chipper are joining the remainder of their family in Auckland from this month.

Plimmerton said goodbye to long term residents Helen and John Chipper last month. John and Helen who owned and operated Moana Lodge for 15 years have relocated to Herald Island, Auckland, to be closer to their children and grandchildren.

“It was a hard decision to make,” said Helen. “But it was an ‘age and stage’ thing really. We knew if we wanted to be involved with our family we had to move where they were. We were the only ones left in Wellington, and with our son moving back to New Zealand from the UK, they are all in Auckland now.

“We will miss our friends and the Plimmerton community. We have lived here for 38 years. It is a very special community we have out here, and with village planning and local volunteers we have all achieved a lot for the village, and we have enjoyed doing it, but the family don’t wait for you… Time moves along and everyone grows up and does their ‘own thing…’ If you want to be part of it, you have to be there!”

John and Helen were both school teachers, but they switched to the accommodation industry, when they bought Moana Lodge. Then it was quite run down and they developed a 10-year plan that involved bringing the lodge up to five-star standard. Their work has paid off in many ways, as they built an international reputation with 95 per cent of guests coming from overseas and nearly a third of bookings on the recommendation of previous visitors.

For eight years Monaa Lodge achieved the top rating for the Wellington region in the annual Budget Backpackers Association survey of guests. And it was rated as “exceptional, immaculate and inviting” in the 2007 Lonely Planet Guide to New Zealand. The news they had achieved the top rating came four days after their first grandchild was born – so it was a whirlwind few days.

They sold the lodge in 2012, when it was a highly regarded backpacker accommodation, and it achieved Qualmark’s top five-star rating. Qualmark is New Zealand tourism’s offical mark of quality and Moana Lodge joins an exclusive club of just 14 backpackers in New Zealand, three of them in Wellington, with the five-star rating.

John said that they took some time to find the right location in Auckland.

“We wanted somewhere with a strong sense of community, and that is quite hard to find in Auckland. We finally found Herald Island, between Hobsonville and Greenhithe, which is not really an island at all, as it is linked by a causeway, but they have a strong local community, and local events… and it was about half way between where our children are living.” 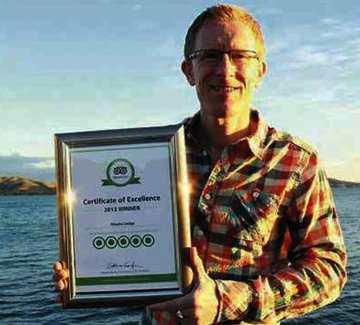 The owner at Moana Lodge is now Danny Harding, who has put his own stamp on the property. He is ex Navy, and Helen laughs that the sheet corners on the beds are razor sharp, given his attention to detail… and training.

Danny said he has a personal passion for guests and backpackers.

“From my own travel experiences, and my time in the hospitality industry, I understand the needs and requirements of both local and international travellers,” he said. “My aim is to ensure that my quests’ visit is both pleasurable and enjoyable.”

And it must be working – Moana Lodge and Danny won first place in the BBH National Quality Awards this year, and additionally, received the Certificate of Excellence from Trip Advisor.

Back to the PRA page
Snap shots past