This site was a 10-acre Māori burial ground. In 1881, it was legally designated as ‘absolutely inalienable’ land reserved for Ngāti Toa Rangatira. By 1925, various legislative Acts had been used to take the land for other purposes, leaving only one-tenth of an acre for the burial ground.

This small site (.09-acre) is all that remains of a 10-acre Māori burial ground in Plimmerton, reserved in 1881.  The original larger urupā or wāhi tapu (sacred place) was once a small part of an extensive area reserved for Ngāti Toa Rangatira.

The urupā lies atop a low bluff, which rises to the east behind the public pavilion on Sunset Parade. It is a small reserve, surrounded by houses.   Most of the graves are unmarked and lie beneath grass.

A tall, granite headstone on the northern edge, is the only indication of the site’s identity as a burial ground. The weathered inscription is largely unreadable but the gravestone is recorded as belonging to Rangihaeata Wirihana (a grandson of Matene Te Whiwhi) who died in the influenza epidemic and was buried in 1918.

Although the loss of this land was included in the Ngāti Toa Rangatira Treaty claim and acknowledged in the Treaty settlement, the loss of their ancestral burial place continues to sadden local Māori.

The history of this particular piece of land originally followed the pattern of Māori land tenure  with Ngāti Toa Rangatira domination taking tenure of the Kapiti/Porirua territory from the Ngāti Ira iwi in the early 1820s.

The history of this particular piece of land originally followed the pattern of Māori land tenure  with Ngāti Toa Rangatira domination taking tenure of the Kapiti/Porirua territory from the Ngāti Ira iwi in the early 1820s. 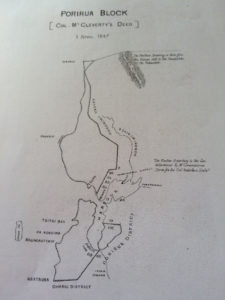 A short time later, the transfer to the British system of land ownership began, with a turbulent transition period around the mid-1800s and difficulties continuing into the 1900s.  Increasing disagreements around land use and land ownership between Ngāti Toa Rangatira and the European settlers, culminated most seriously in the 1840s with armed skirmishes at Wairau and around the Hutt Valley.

On the 23rd July 1846, the Crown seized the Ngāti Toa Rangatira leader, Te Rauparaha, here at Taupō and held him without trial for 18 months.   On 1 April 1847, while he was in captivity, the Crown negotiated the purchase, for £2000, of most of the Porirua district from other Ngāti Toa Rangatira chiefs who were looking to secure his release.

At the time of the sale, Ngāti Toa Rangatira retained three reserves totalling about 10,000 acres.   The largest of these reserve areas stretched from Wainui (Paekakariki) to Tawhiti Kuri (Plimmerton), and this area included the Taupō block.

The Native Lands Acts 1862 and 1865 established the Native Land Court. This focused on converting Māori land titles into individualised titles to free up more land for purchase by settlers.  Justice Minister Henry Sewell described the aims of the court as, ‘to bring the great bulk of the lands in the Northern Island… within the reach of colonisation’.

In 1874, Matene Te Whiwhi and Tamihana Te Rauparaha brought the Taupō block before the Native Land Court and a Certificate of Title was issued in 1875.

In 1881, the Native Land Court subdivided the Taupō block into four sections.     Taupō No 2 Block, 10.3 acres, was designated ‘absolutely inalienable’ land as a ‘burial place for the Ngatitoa tribe’.

Taupō No 2 Block – 99% taken through legislation

In 1896, the Native Reserves Act Amendment Act, Taupō No 2 removed Wi Parata as the Ngāti Toa Trustee and vested that responsibility in the Public Trustee as it was “deemed expedient that the land be used for other purposes”.  At the same time, one acre of the land was to be set aside for a burial ground.

In 1897, the Plimmerton community disputed the 1896 legislation, with Mr T K MacDonald saying, “It had been understood that the native reserve at the end of the township was to remain for all time a reserve…”

In 1906, the Crown took Taupō No 2 Block as a scenic and historic reserve under the Scenery Preservation Act.  This action was more in accordance with Plimmerton community wishes, and aligned with Premier John Seddon’s proposal as reported in January 1896 to, ‘preserve what little of the native bush that remained and to restore in some measure that which had gone’. 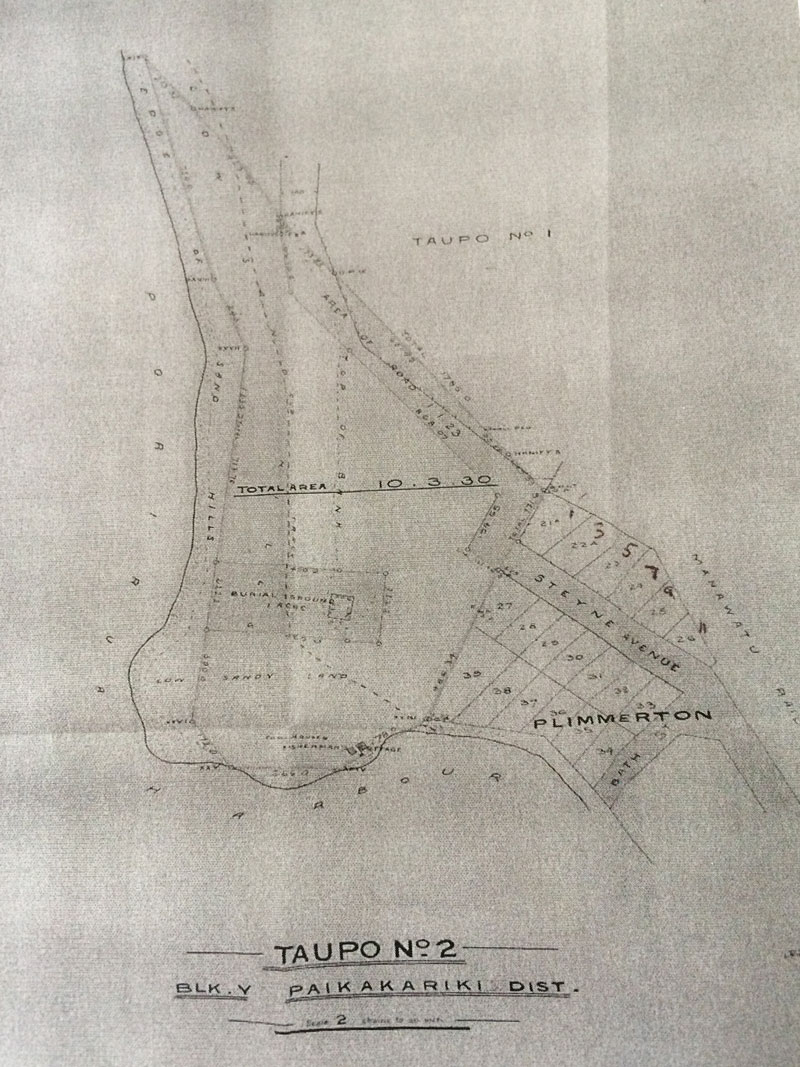 In early 1907, George Troup completed a public road from the Pukerua Track to Steyne Ave and the land taken from Taupō No.2 Block, was proclaimed as a public road.  The Dept of Lands noted that there was no need for change to reserve the cemetery because it was already protected under the Scenery Preservation Act.

In 1908, the new Premier, Joseph Ward, known for his focus on supporting and promoting private enterprise, saw the 1906 legislation reversed with the passing of the Taupō No 2 Block Act, opening up these 10 acres again for other purposes.

In December 1913, the Public Trustee began advertising the leasing of all the sections of the Taupō No 2 block – excluding the 1-acre burial ground. 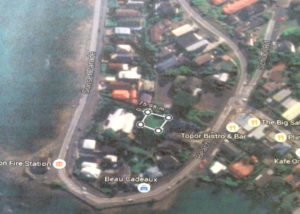 In 1923, new legislation transferred the land into Crown ownership so that the lessees could purchase their sections and gain freehold title; £840 compensation being paid to the 48 Ngāti Toa Rangatira beneficial owners.

This left the 1-acre as the Māori burial reserve.

On 14 November 1922, the Hutt County Council gave notice of its intention through the Public Works Act 1908 and the Counties Act 1908 to take most of the land in the burial reserve for a public hall, bathing sheds and conveniences.

In 1923, the passing of the Reserves and Other Lands Disposal and Public Bodies Empowering Act, enabled the Hutt County Council to take the land in 1924, and build the Pavilion in 1925.

Again, the graves in the flat area were exhumed and re-interred in the one-tenth of an acre urupā on the top of the hill.   Ngāti Toa protested throughout this whole period for the return of their wāhi tapu, by writing letters to the Government – to no avail. 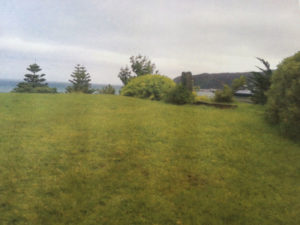 Under the original 1896 Act, the net proceeds from the rents were to be used for disinterring and removing all bodies to be interred afresh in the smaller burial ground, and for planting and beautifying the burial ground and erecting a suitable monument with the names of all who were there buried.

Little of this commitment has been acted upon.   In 1924, further re-interment of koiwi was required but a newspaper columnist, writing in 1975, described finding what appeared to be a human bone on the Plimmerton hillside.   Residents told her that it was an old burial ground, and that every time it rained more bones appeared.   No monument has ever been provided.

So it is that today, this tiny urupā is all that remains as Ngāti Toa Rangatira reserve land here.   The rest of the 10.3 acres is now occupied mostly by houses, with some community facilities: a public pavilion, tennis courts and a kindergarten.

Back to the Plimmerton History page
Red Cross