St Theresa’s Church was built in 1931 on land  donated by descendants of James Walker, an early farmer. It separated from the Johnsonville Parish in 1940, after the Paremata Bridge was built in 1936 and the local population grew. The school was added in 1949. 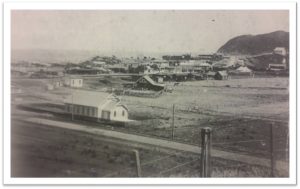 St Theresa’s Church was opened in April 1931, built for a cost of £1700. Before this time the Catholic congregation shared St Andrew’s  with the Anglicans. At the time Plimmerton was part of the Johnsonville parish and St Theresa’s had no resident priest. By the late 1930’s with the opening of the Paremata road bridge and centennial highway through to Paekakariki, the population in the area increased. In 1940 St Theresa’s became a separate parish which included Porirua, Titahi Bay, Pauatahanui and Pukerua Bay. In March 1942 the old presbytery opened across the road from the church. The land for the church, presbytery and half the land for the school was donated by the Walker family, descendants of James Walker who lived in the area in the mid 1800’s and owned large areas of land here. There were church extensions and renovations in 1980 and in 1986 a new Presbytery and hall were opened.

Prior to any churches being built , services for both Anglicans and Catholics were held in the small school building on the eastern side of the railway line.

In 1949 the school, costing £9000 , was built next to the Church. It was a well constructed building consisting of three fine roomy classrooms and a staff room, surrounded by a large playing area. The school started with a roll of fifty-one pupils and was staffed by teaching sisters from the order of St Joseph of Nazareth. They continued to teach until May 1977 when they handed over their duties to lay teachers due to lack of personnel. The Sisters of St Josephs were very much part of the Plimmerton Community and several hundred residents attended their farewell function. Eight weeks after celebrated its 25th anniversary the school was badly flooded along with most of the homes in James Street. Children were evacuated by dinghy and taken home on a fire engine.